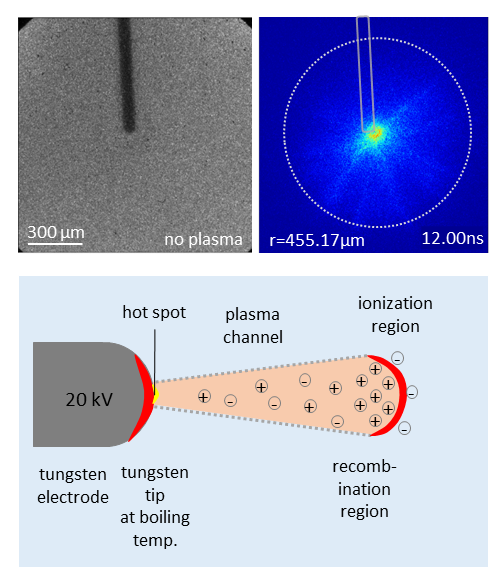 The spectra are dominated by the black body continuum from the hot tungsten surface and line emissions from the hydrogen Balmer series. Typical temperatures from 6000K up to 8000K are reached for the tungsten surface corresponding to the boiling temperature of tungsten at varying tungsten vapor pressures. The analysis of the ignition process and the concurrent spectral features indicate that the plasma is initiated by field ionization of water molecules at the electrode surface. At the end of the pulse, field emission of electrons can occur. During the plasma pulse, it is postulated that the plasma contracts locally at the electrode surface forming a hot spot. This causes a characteristic contribution to the continuum emission at small wavelengths. The spectra also show pronounced emission lines of the hydrogen Balmer series.

Nanosecond plasmas in liquids are an important method to trigger the water chemistry for electrolysis or for biomedical applications in plasma medicine. The understanding of these chemical processes relies on knowing the variation of the temperatures in these dynamic plasmas. This is analyzed by monitoring nanosecond pulsed plasmas that are generated by high voltages (HV) at 20 kV and pulse lengths of 15 ns applied to a tungsten tip with 50 micrometer diameter immersed in water. Plasma emission is analyzed by optical emission spectroscopy (OES) ranging from UV wavelengths of 250nm to visible wavelengths of 850nm at a high temporal resolution of 2 ns.

The data indicate two contributions of the hydrogen line radiation that differ with respect to the degree of self-absorption. It is postulated that one contribution originates from a recombination region showing strong self absorption and one contribution from a ionization region showing very little self-absorption. The emission lines from the ionization region are evaluated assuming Stark broadening, that yielded electron densities up to 5 x 10^25 m^-3. The electron density evolution follows the same trend as the temporal evolution of the voltage applied to the tungsten tip. The propagation mechanism of the plasma is similar to that of a positive streamer in the gas phase, although in the liquid phase field effects such as electron transport by tunneling should play an important role.